Where fairytales are real and nature is full of magic.

I promised to share some of the highlights of the Philadelphia Flower Show. The theme? Springtime in Paris. Some of the participants followed this concept, albeit loosely. Others did not bother, as far as I could tell. Some of the guests really got into it, with Paris-themed shirts and accessories.  Forgive the graininess of the photos. Many of the displays were not well lit, which challenged my poor little point and shoot to no end.

I’ve narrowed my ultimate favorite displays to 3. Not only were the design and executions beautiful, but they were also sporting enough to play along with the Paris idea. 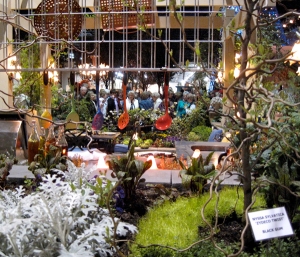 The designers at Stoney Bank Nurseries created a rooftop garden design featuring culinary herbs, flowers, espaliers, and a kitchen and dining area. A French Chef’s dream. Not only was this a creative use of roof-space, but it was pretty enough to be stunning in anyone’s back yard. The project was done in collaboration with Stone Manor Lighting, if you’re wondering where to get the gorgeous peach colored fixtures.

Using a green wall product called EcoWall  to create an allee of trees is clever enough… but I was delighted to discover the trunks rising up from a koi pond with lily pads. The designers at Groundswell were inspired by Monet’s Water Lilies (See a video and explanation here) but I was instantly brought back to pages of my favorite children’s book the Lorax by Dr. Seuss…

Way back in the days when the grass was still green
and the pond was still wet
and the clouds were still clean,
and the song of the Swomee-Swans rang out in space…
one morning, I came to this glorious place.
And I first saw the trees!
The Truffula Trees!
The bright-colored tufts of the Truffula Trees!
Mile after mile in the fresh morning breeze.

And, under the trees, I saw Brown Bar-ba-loots
frisking about in their Bar-ba-loot suits
as they played in the shade and ate Truffula fruits. 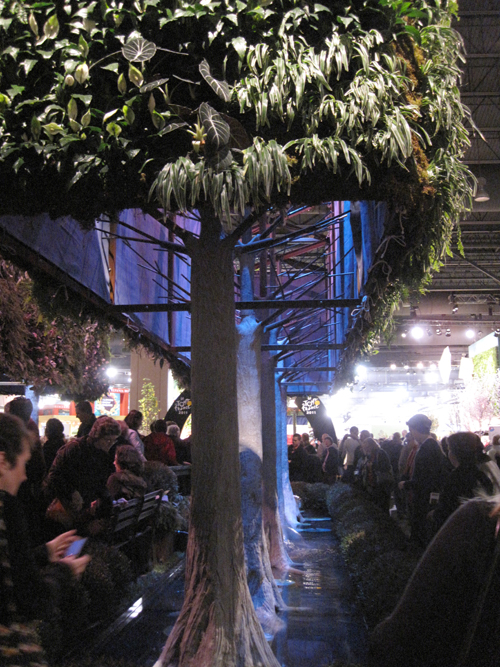 From the rippulous pond
came the comfortable sound
of the Humming-Fish humming
while splashing around.

What bride would not love a wedding like this one by Robertson’s Flowers? The pictures are dark and I had to throw out the majority of them. But you get the idea. The best part? A gazebo draped in weepy flowers, twigs, and strands of shiny baubles.

I also liked the sensory garden by the American Horticultural Therapy Association– which advocates the use of gardens as therapy for the elderly, blind, physically handicapped, or otherwise disabled. Invite active participation through carefully planned heights of the vegetable and flower beds, and combine texture, smell, and sound to create a full sensory experience.

Also fantastic were: The carousel creatures (all made from living material) and the Smith and Hawken Display (yes, they’re back…. via Target). Though the Philadelphia Water Department’s curbside stormwater garden was a little lack-luster in execution, I appreciate the public education effort and hope to see them continue to spring up all over the place (pardon the pun). The EPA’s bog and temperate forest display was lovely, and though my photography efforts did not bode well, you can get a plant list here. The mini gardens were adorable, and make me want to create my own just as soon as things start greening up here on Cape Cod.

See the rest of the carousel critters and more highlights from the 2011 Philadelphia Flower Show via my Flickr album.